When it comes to saving money, behaviour varies widely among nations but it’s a universal truth that we all love a good bargain! There’s no better feeling than finding that 20% off discount code allowing us to add those few extra items to our basket.
From second-hand shopping to scouting all over for the latest discount code, people are always looking for ways to save money when it comes to shopping. But which countries have the most frugal spenders?
To answer this, experts at Savoo have analysed metrics such as household spending and saving, the number of flea markets available, Etsy listings, and the number of Google searches for discount codes to determine where in the world the savviest spenders live.
Each country was awarded a score out of 10 for each metric, before combining together for one final score. The higher the final score, the savvier the country.

When it comes to savvy spenders, Belgium has everyone beat! With an average household saving of £1,026 per year, this western European country’s low debt (which is a sum of various loans such as mortgage and credit cards) and high disposable income after tax makes them the world’s savviest nation.
Using data sets from OECD, we were able to calculate how much each country saved based on their average household income and household savings. The UK places in eighth position, with a household saving of just £71 per year - a mere fraction of our Belgian counterparts - . This is largely due to the UK’s high household debt (£29,642) and lower average income in comparison to other nations (£20,675).
Despite coming in tenth place overall, frugal Switzerland has the second-highest savings against all other countries. The research found that the Swiss have an average household saving of £4,316 per year, but their high household debt of £59,548 pushes them lower down the leaderboard. 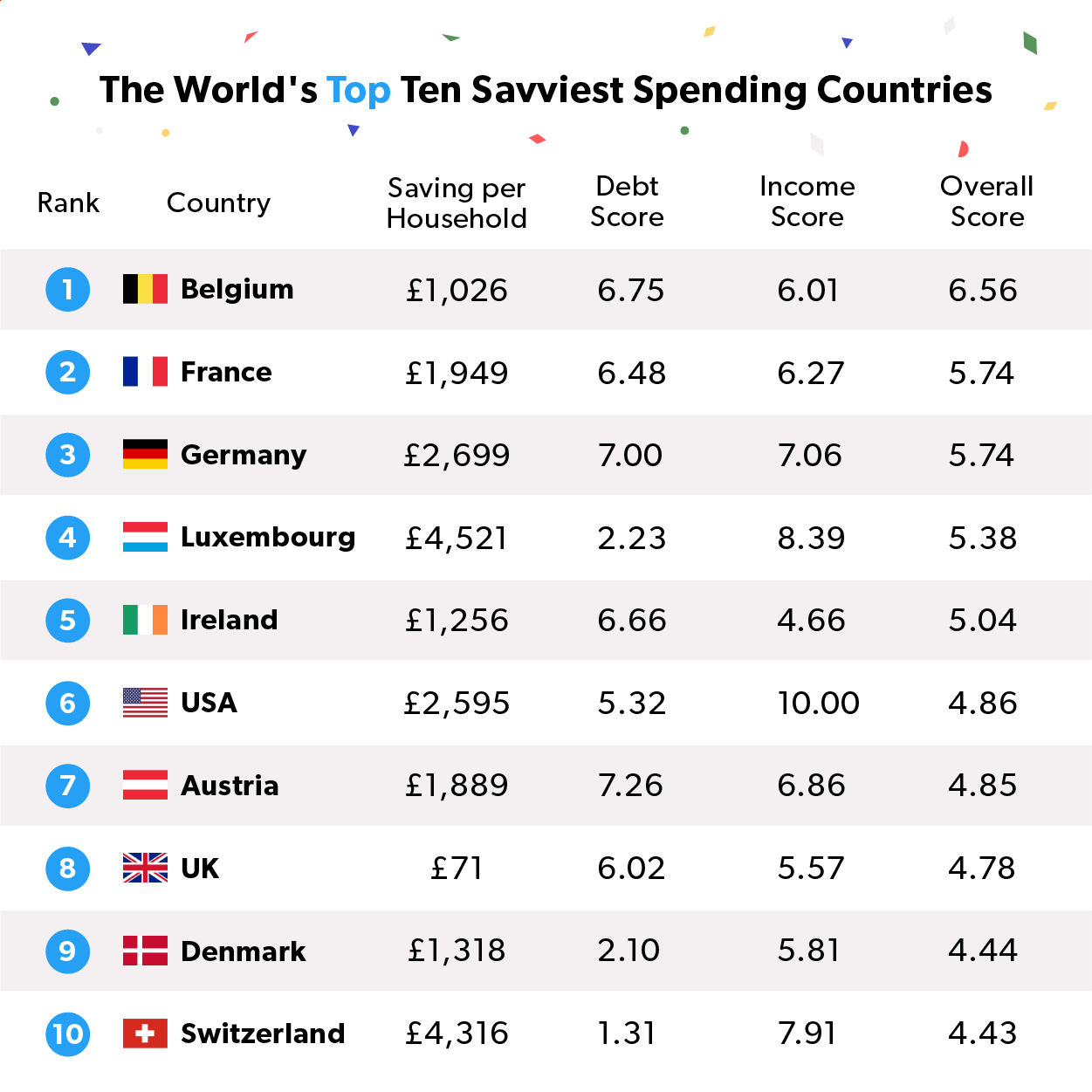 Greece is home to the world’s least savvy spenders

Keen to unveil which country are home to the least savvy spenders, we ranked the countries with the lowest total score.
Our findings reveal that Greece is the world’s least savvy spending country due to low household savings. The European country actually has a negative savings rate, with Greeks currently saving -14% of their disposable income. This totals out to a huge -£1,781 annually, so not only are Greek households not saving at all, but they’re spending more on their outgoing cost! Residents here are also least likely to search for coupon codes whilst shopping online - making less than one (0.95) search per 1000 people a month.
Following closely behind is South Korea. Citizens here are happy to pay full price for an item, as shown by their infrequent search for discount terms online (0.65 searches per 1000 people). Although the average household saving works out to be £1,130 a year, the country’s lack of flea markets and low amount of Esty listings has knocked them down on the scoreboard. 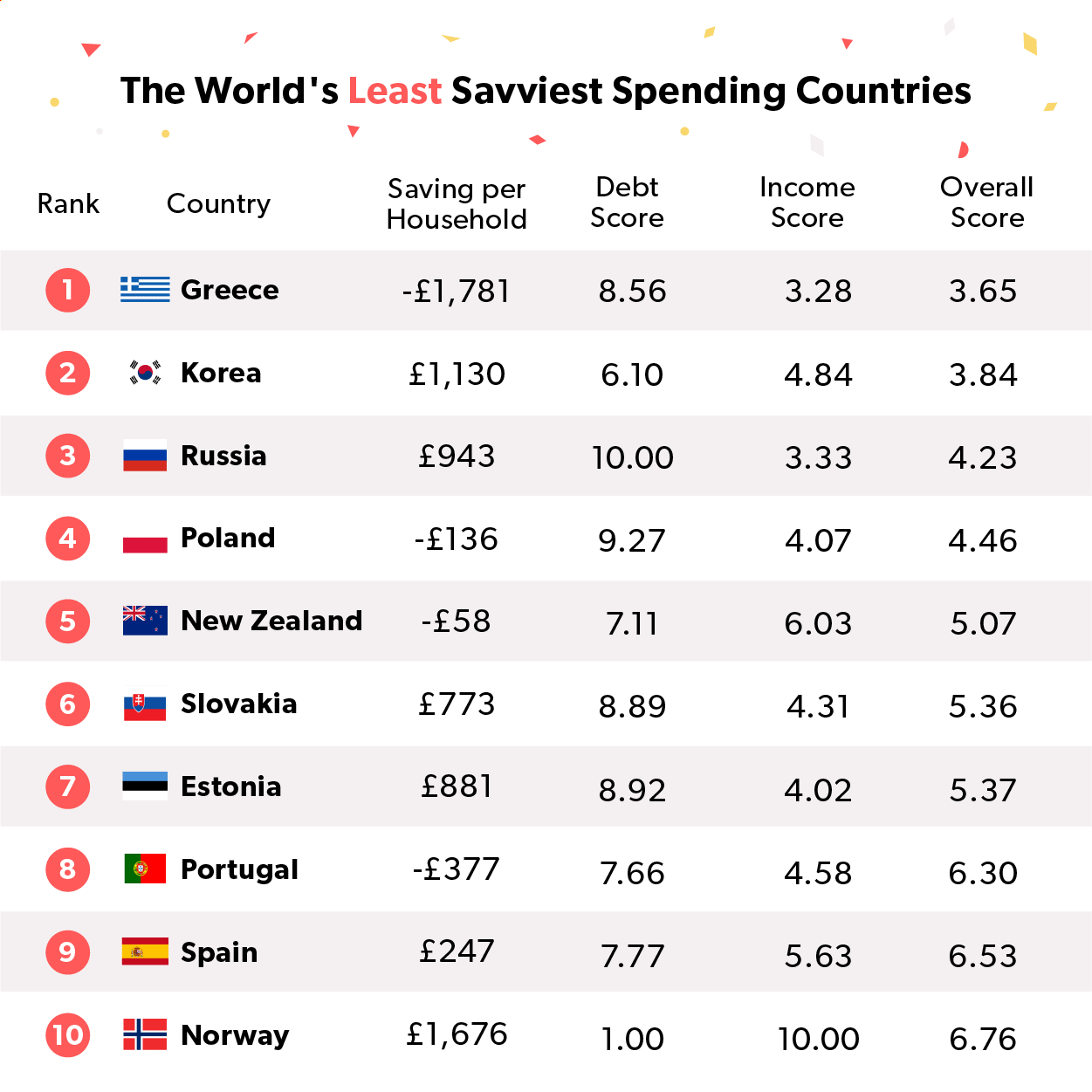 Ireland is home to the thriftiest shoppers 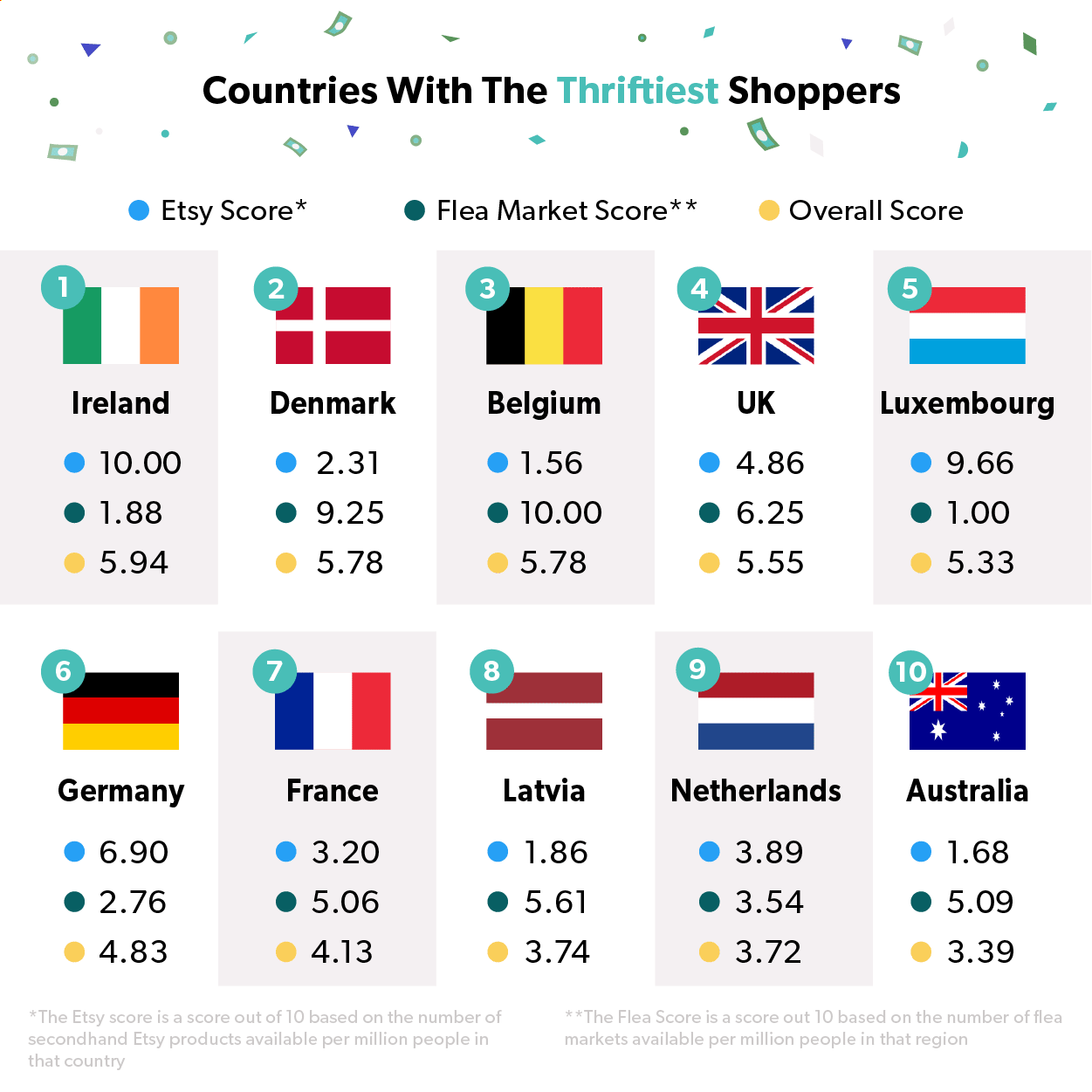 With tonnes of discount codes up for grabs each month, Savoo was interested to see which nations are on the hunt for a bargain the most by analysing how much each country searches for discounts and voucher codes online.
Unsurprisingly, Belgium topped the charts once again, ranking as the most deal savvy nation with 81 discount code-related searches per 1,000 people each month - Belgians are passionate about bagging some savings.
France has earned itself in second place as the country most enthusiastic to get a deal online. French residents are making 55 searches per 1,000 people for discount and voucher codes each month. On the other hand, Luxembourg residents are the least likely to search for a discount whilst shopping online making just 340 monthly searches for savings a month which works out to be 0.54 searches per 1,000 people. 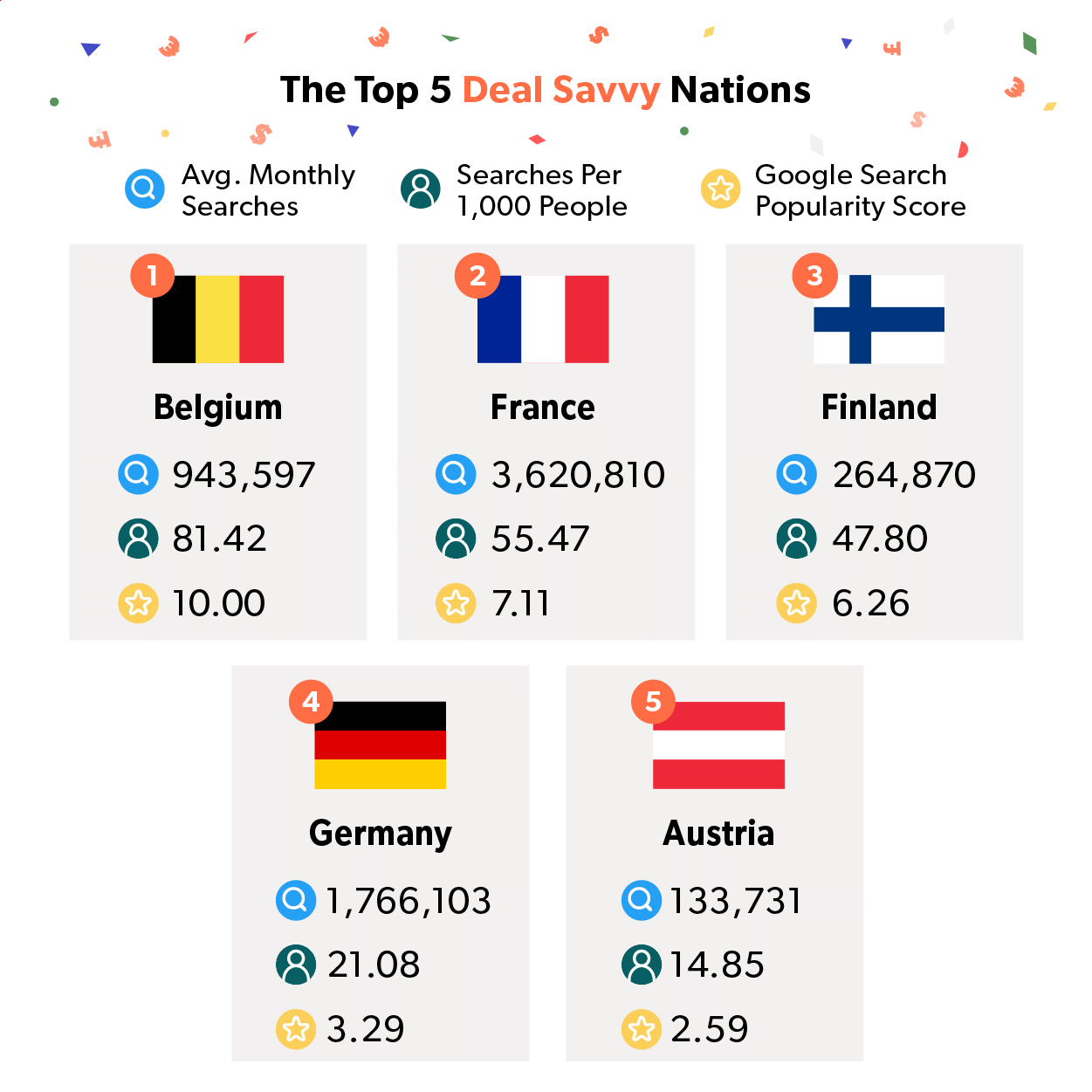 Coventry ranks as the UK city home to the savviest spenders

Determined to find out where in the UK is home to the savviest spenders we analysed new metrics. By using the cost of living and monthly income to work out how much each person could potentially save as well as looking into the number of Google searches for discount codes terms were made by each city we were able to find out where folks have the biggest stash of cash.

Coventry comes in as the UK’s savviest spenders city thanks to their highest potential savings of £1,073 a month. Despite this Midland city making just 14 searches per 1,000 residents each month for online promo codes and vouchers, their high potential savings propels them to the top of the charts.

Following in second place is Glasgow, based on their high monthly searches for savings (14) and potential monthly savings of £690.

It may come as no surprise to learn that our capital comes in last place. Londoners only have a potential monthly saving of £292 which is the second-lowest just after Bristol (£242) thanks to the city’s unsurprisingly high living cost of £2,534 a month. Making just 10 searches for every 1,000 people for discount terms the capital follows behind Bradford, Wakefield and Birmingham cementing it as the UK’s least savvy city when it comes to spending. 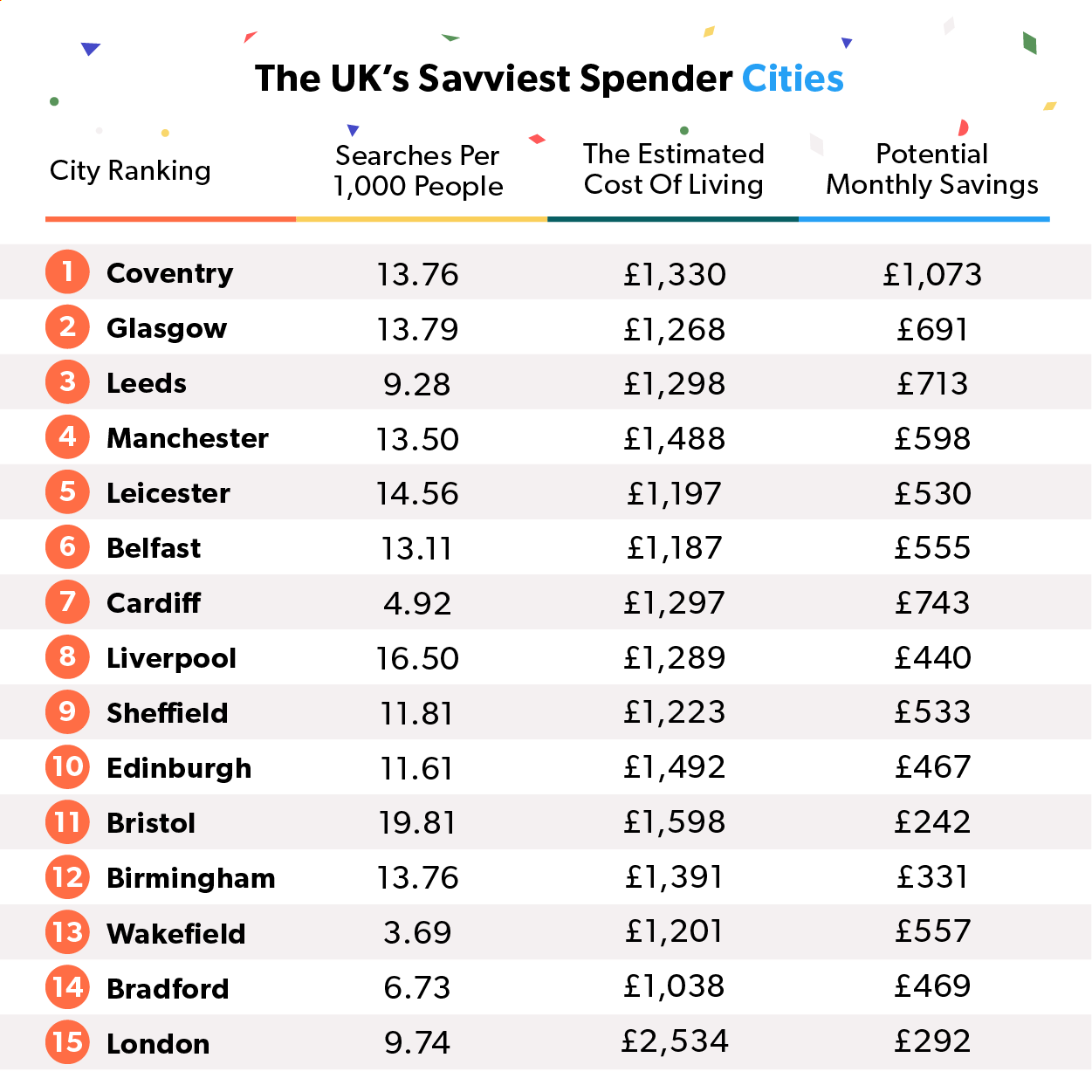