Cyclists Fighting Cancer gives new bikes - including tandems and specially adapted bikes and trikes - to children and young people who have been affected by cancer throughout the UK. The effects of the disease and its treatments in children are numerous; amputations, balance issues, physical weakness, coordination difficulties and lack of self esteem are just a few of the most common side effects seen in many patients. When giving a child a bike to help with their recovery, Cyclists Fighting Cancer is also giving them the chance to be a child again.

Cyclists Fighting Cancer plans to supply another 500 awards this year which will take the total since the charity started in 2005 to over 2000 cases. In addition, Cyclists Fighting Cancer is funding a dedicated research study with the University of Leeds to clearly illustrate the relationship between physical and mental well-being and physical activity in children surviving cancer. The charity's main focus is on raising awareness and providing a bespoke service to each individual where possible.

Exercise has been shown in numerous adult studies to be the single most effective way of improving both physical and mental wellness for people surviving cancer.

"We promote cycling as the best form of exercise-based rehabilitation; especially for children, because it provides all these benefits in a low impact, fun, sociable and exciting way. Cancer also causes massive disruption in families, therefore we also give bikes to their siblings, and in many cases their parents, in order that they can take part in an activity as a family once again after what can be years of hospitalisation and upheaval."

Other ways to support

Cyclists Fighting Cancer operates entirely on the kind support of the public and cyclists cycling around Britain and across the world to fundraise and help raise awareness. All monies donated make a huge difference to the total fundraising effort and ultimately to the number of children they are able to support. Choose to support Cyclists Fighting Cancer at Savoo today, or get involved in a local event. 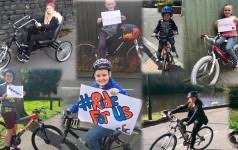 Raise donations for Cyclists Fighting Cancer at our top stores