Charity shopping in the UK: Where are the biggest charity hubs?

In difficult times giving back is extremely important. Particularly since lockdown, many charities have seen a decline in donations with negative consequences for those in need.
Now that we are seeing lockdown restrictions ease, second-hand stores and charity shops are also reopening across the country.
Historically, charity shops have been an important part of the retail industry in the UK since the 19th century. These shops sell donated or second-hand goods to raise funds for specific charities. They are eco-friendly, create new jobs and play a vital role in the development of communities with low resources.
We've conducted a study to determine which UK cities and countries are the most charitable, where are the highest rated charity shops and which tips we can follow when it comes to bargain hunting and charity shopping. 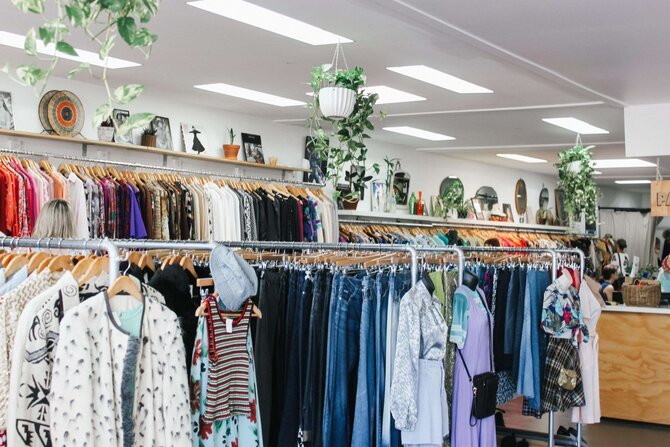 There are more than 11,200 charity shops in the UK

Shoppers in the UK are very enthusiastic about charity and donations in general.
The Charity Retail Association estimates that there are approximately 11,200 charity shops in the UK. Still, the high volatility of this sector makes it hard to get an exact number of the quantity of charity shops in British land.

According to Google Maps, 2,098 charity shops are distributed across the 20-most populated cities in the country. London, with 250, occupies the first position.

But in a year characterised by outdoor restrictions, interest in charity has also been significant on the web, with many people in the UK searching for ways to make online donations.

Between April 2020 and March 2021 in the UK there were on average 2,094,400 monthly Google searches related to charity. These included terms such as “charity shops", “donations" or “NGO", among others. The UK came also third in the list of countries that donated through the GoFundMe platform in 2020, only after Ireland and the United States.

Which UK cities are the most charitable? 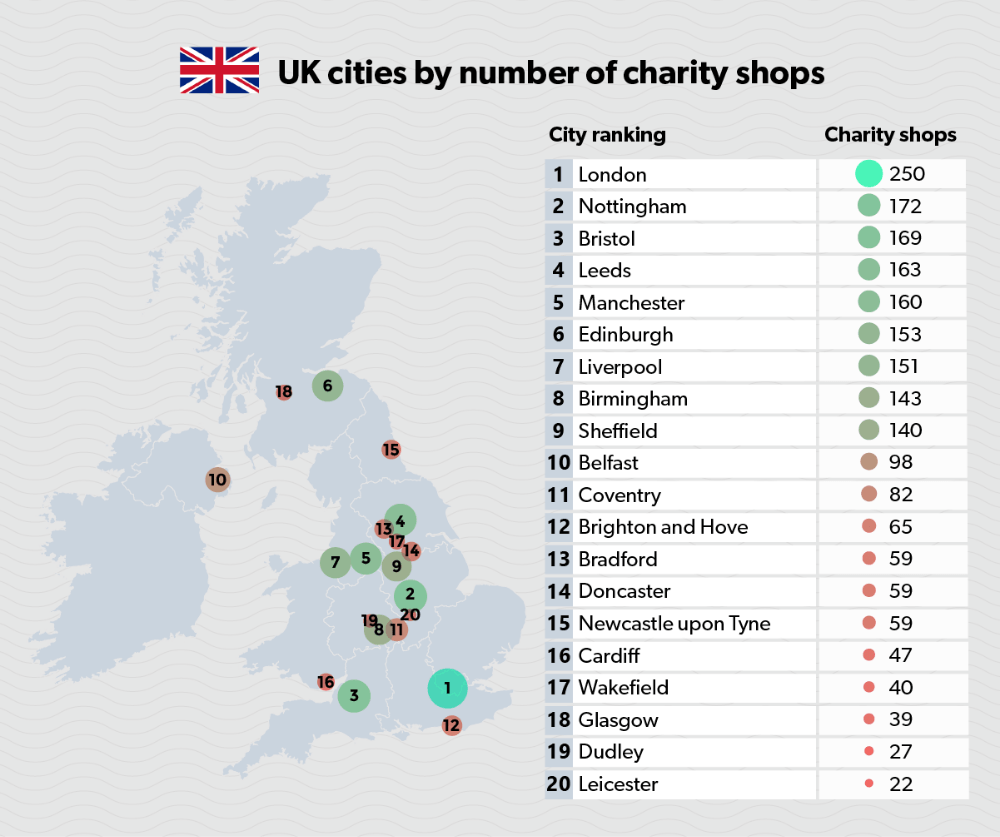 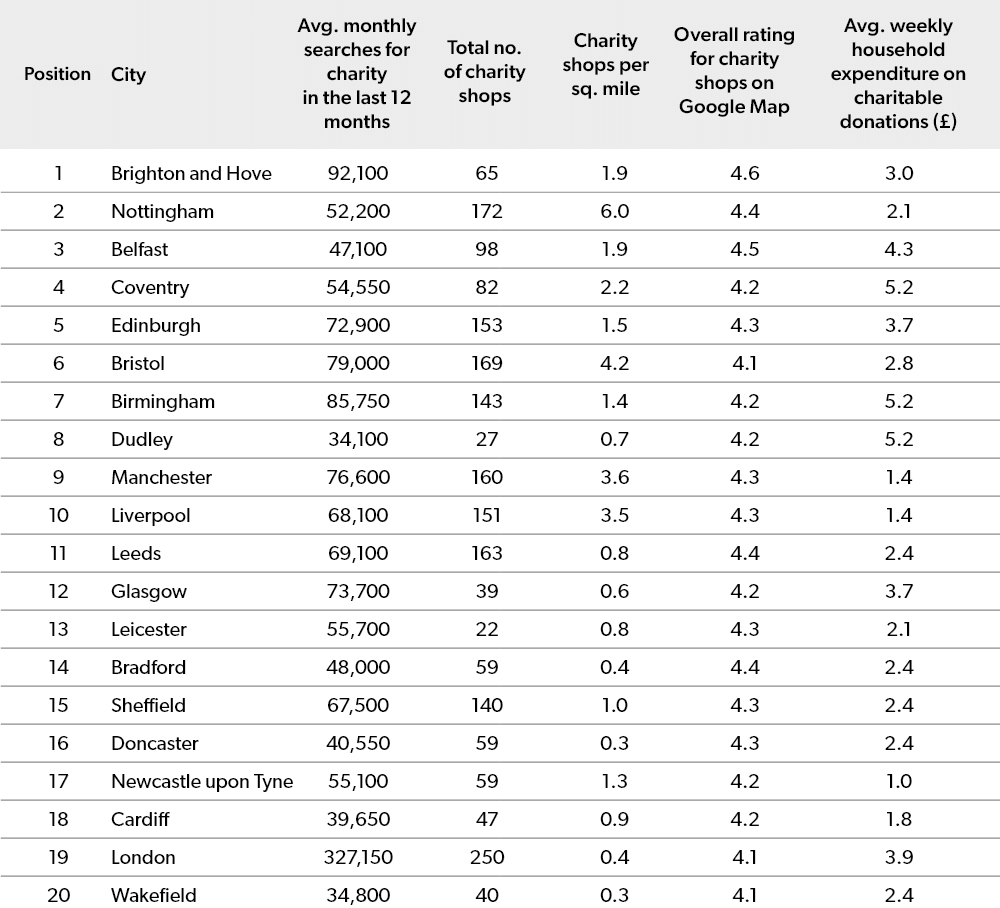 We analysed the 20 most-populated cities in the UK, looking at average monthly Google searches related to charity, the number of charity shops according to Google Maps, the average rating given by customers and the average weekly household expenditure on charitable donations.

Brighton and Hove stands out as the most charitable city, with the highest volume of monthly Google searches for terms related to charity (92,100).

Besides having the biggest quantity of charity shops and the highest number of average Google searches for keywords related to charity, London stands almost at the end of the chart, in position 19, with less than 1 charity shop per square mile and the lowest overall ratings on Google Maps (4.1).

The USA and the UK lead the global charity interest

When it comes to the most charitable countries in the world, the United States takes the crown with the highest number of registered charities (22,232), the biggest amount of average monthly Google searches related to charity (+10 million), the biggest quantity of money donated to foreign aid grants ($35.47 billion) and the first position in the Charities Aid Foundation (CAF) World Giving Index.

The UK stands in second position in the global ranking, performing very well in all indicators. As seen on the table below, the UK, in fact, stands right behind the USA in almost all variables. However, the difference between both countries is bigger in the CAF World Giving Index, with the USA in the first position and the UK sitting in seventh.

Ireland, Germany and Canada also complete the top five of most charitable countries. 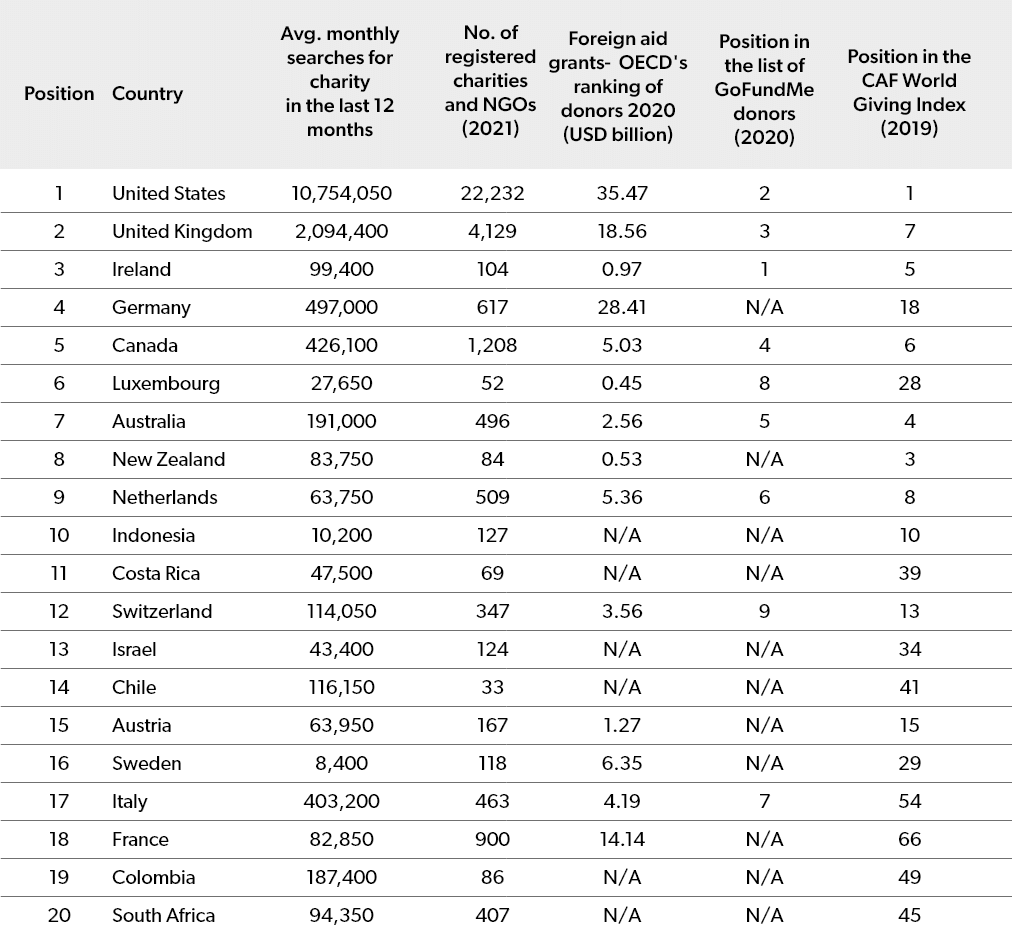 There are multiple perks to paying a visit to a charity shop. You can find unspotted gems you won’t find anywhere else at reduced prices, you are avoiding the fast fashion trend that is causing so much environmental impact and you can purchase items knowing you are contributing to a fair cause that might change people’s lives.

It’s also true that finding the right item -one that will cover your needs, in good condition and with a fair price- can sometimes prove difficult.

At Savoo we have prepared a list of tips that will help you to get the best deals when charity shopping and become an effective bargain hunter, whether you are a regular charity shop customer or a newcomer:

It’s useful to have an idea of what you are trying to find on your charity shopping journey. If you want to buy a specific item, it could be worth going to a specialised charity shop instead of a generic one. It will save you some time and you’ll have more chances of finding what you’re looking for.

If you are up for buying clothes and accessories, keep in mind if that vintage item you fancy will match with the rest of your wardrobe.

Tip 2: Do a little research

Before going to a charity shop it’s useful to do some research online to find out the initial price of the item you want to buy. Thanks to websites like Amazon and eBay you have access to this information at your fingertips, which will help you to realise if the price is reasonable once you are at the charity shop.

Bonus tip: Since most items are second-hand donations, the price should be lower than in the regular market. If this is not the case, based on your research, you can try to persuade the seller to offer you a new price.

Tip 3: Spend time researching the area you are shopping in

It’s a common practice in bargain hunting to go to charity shops located in affluent or central zones as there are more chances to find luxurious items or clothes that may have been donated by the residents in those areas. It’s also true that charity shops might be more expensive in these areas. If you decide to go to less fancy neighbourhoods, you might be able to find a mix of pieces with different quality and origins, and probably at a cheaper price.

Tip 4: Time of the day is really important for finding the right bargain

Weekday mornings tend to be less packed when it comes to bargain hunting in charity shops. The amount of customers is reduced compared to the weekends, and as a consequence, there are better chances of finding good-quality items. Also, if you go on a regular basis, you will probably find items that have just arrived.

Going in the late afternoon, however, also has its perks, since many sellers tend to lower their prices in order to get rid of stuff before closing time.

It’s a good idea to become friends with members of the staff as they might be able to get to know your tastes and save some pieces for you in advance.

Tip 5: Keep an open mind to find the best deal

It’s true that preparation and focus are important, but also, it’s key to allow yourself to get surprised by things you weren’t expecting to find. Charity shops are a great way to obtain timeless pieces that are difficult to find in high street stores. You can get vintage clothes at a fair price that you can reuse or repurpose in multiple ways, according to your imagination.

It’s important to examine carefully the quality of the items. Check the fabrics and look for possible stains or smells before getting any unpleasant surprises.

If this is your first time at a charity shop, also keep in mind that these are not always the most luxurious venues. You can find interesting stuff that is not classified in the right area or that may not be presented in the best way. If it’s a clothing item try to imagine how it would look on you after washing it and ironing it.

Don’t go to a charity shop if you are in a rush. Since there is not always a clear layout, it might take a little while to find that particular piece you are searching for. Most charity shops organise their items by colour or size, which can be challenging depending on the item you are looking for.

When you are at a charity shop, pay attention to those items whose tags have been cut.

Some high street fashion companies donate stock they haven’t sold during the season. In most cases they agree that the item will be sold with the condition that the tag is removed to prevent undesired returns.

It’s good to keep this in mind as you might be able to find a new designer piece with cut-off labels at a bargain price.

Many charity shops have websites or social media channels. Following them is a good way to get constant updates about next sales or the arrival of new stock.

With all the explosion of ecommerce, particularly over the last 12 months, you can now buy from charity shops like Cancer Research and Oxfam from the comfort of your home. Keep in mind, though, that deliveries have an added cost.

Tip 9: Volunteer at a charity shop

This will be beneficial for you in a variety of ways!

You will be contributing to a good cause giving some of your time to help raise funds for charities. At the same time you will have more exposure to the newly arrived items and you might be able to choose those you like. Some charity shops offer special coupons to staff with 10% or 20% discounts.

Get rid of clothes and other items that you don’t use by donating them to your local charity shop. Not only will you be helping a good cause, you’ll also be making space in your home for new items that you might come across. Try to donate good-quality items, the kind you would like to buy when you are at a charity shop. Don't forget, you can also raise free donations for charity by using our built-in search engine too.

“At Savoo, we predict that charity shops will continue to have a deep impact on retail consumption across the UK - especially after the challenges of the last year. It’s a wonderful way to find interesting items at cheaper prices, save money and help causes we deeply care about.

Our desire is that the quantity and the quality of charity shops across the country will increase and that customers will become more aware of the options they have and how to buy in a smarter and more sustainable way".