Want to know how much it costs to attend a wedding?

It might cost an arm and a leg to get married, but it’s also becoming increasingly expensive to attend weddings, both on home soil and overseas.

To find out just how much wedding guests are spending, Savoo has surveyed 504 Brits who have been part of a bridal or groom party in the last two years to reveal the most common expenses, the cities spending the most and how the cost to attend can result in stress, debt, and even family rifts. We also look at how many hours bridesmaids spend planning pre-wedding events to reveal how much you could earn if you were to hire out your services.

There are several expenses associated with going to a wedding, from accommodation to outfits, hair, and gifts. To find out how much people spend, we asked wedding guests, and those part of the bridal or groom party, how much they spend on different elements associated with attending a wedding. 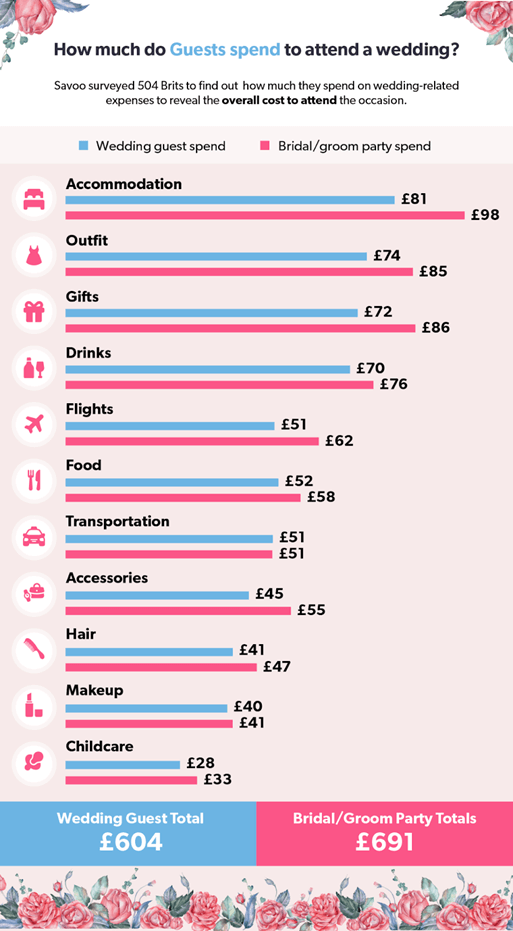 Based on our results, the average wedding guest can expect to spend a staggering £604 to attend someone’s special day. A bridal party member comes in at slightly more at £691, which does not include any pre-wedding activity costs, which can add significantly more costs.

Perhaps unsurprisingly, accommodation is the most expensive part of attending a wedding, costing Brits just under £100 on average for a weekend wedding. If the venue is abroad, guests pay an additional £51 to £62 on average for flights. Other logistics can include transportation (such as taxis) with a spend of £51 and for parents wanting to dance the night away, an average between £28-33 is spent on childcare.

In terms of looking the part, bridal party members are spending up to a combined £228 on their outfits, accessories, hair, and makeup which accounts for more than a third of their overall spend. Average wedding guests spend not much less at £200 on their wedding look. Those aged 16-24 spend £44 on makeup, compared to those aged 45+ who are spending up to £74 on average.

With the average number of wedding invites being two for the next year, the average guest can expect to part ways with £1,208 of their hard-earned cash.

Those lucky enough to be invited to the hen or stag party shenanigans have spent up to £768 on the pre-wedding events alone, which includes another round of expenses from fancy dress to risqué entertainment.

Not only do they have to fork out on pre-wedding events, they’re also paying an additional £82 to attend the day, with nearly half of that (£29) being on the wedding day look.

Overall, attending pre-wedding events (e.g. hen or stag party) and the actual wedding as part of the bridal party can cost up to a whopping £​​1,459 on average.

When looking at the survey results by location, we reveal the top 10 cities paying the most to attend a weekend wedding:

Surprisingly, those in Belfast spend the most (£908) to attend a wedding on home soil. This is down to respondents spending consistently more on average on things like accommodation (£133), hair (£77) and gifts (£106). In total, they spent £288 more than those from Sheffield and £293 more than those from London, following in second and third respectively.

Edinburghers spend the least on attending a wedding at £362 which is 86% less than those in the top spot. In fact, they can attend twice as many wedding weekends and still have money left over to spare when compared with Belfast.

Brits say the cost to attend a wedding results in pressure, stress, and debt

While many of us love a wedding, the cost to attend them can be daunting, particularly with the cost of living rising. We asked people about the impact the expensive affair has on them. 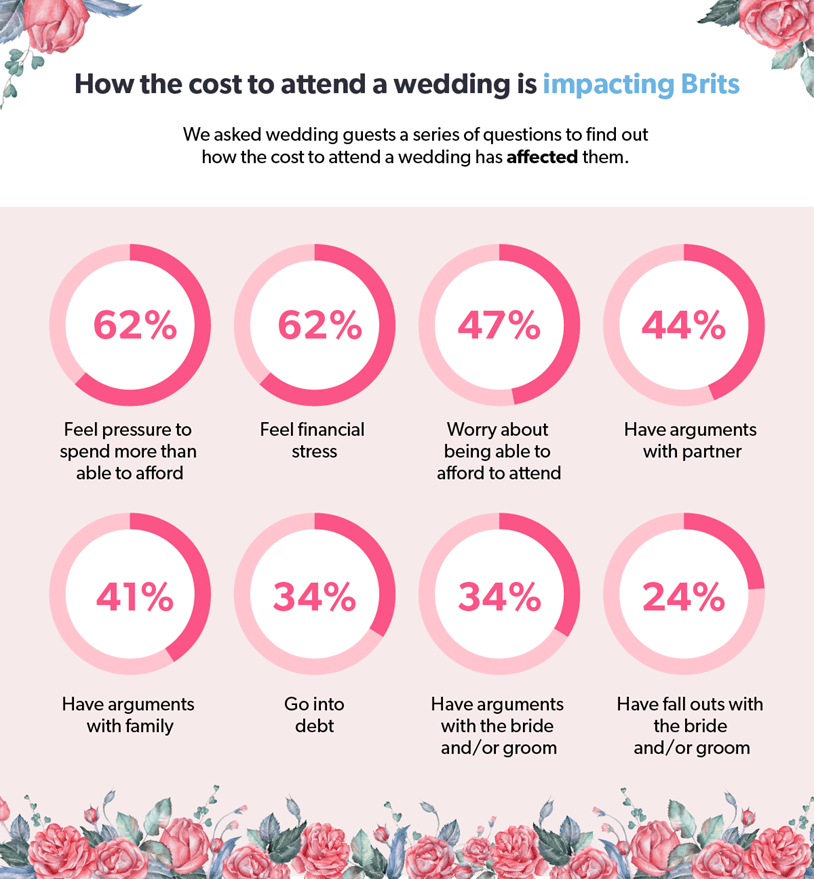 This is the same for stag and hen parties, which are becoming increasingly lavish, with over two in five people (42%) saying they can’t afford to attend the pre-wedding festivities this year in the UK.

We all know money can be a contentious subject in relationships and the cost of attending a wedding has even resulted in arguments with partners (44%), family (41%) and the bride/groom (34%). Men appear to have more family bust-ups, with over 45% saying they’ve had an argument with a family member, compared to under 40% of women.

Brits could earn £1,381 per wedding as a bridesmaid for hire

The time spent by bridesmaids organising pre-wedding events and helping to ensure the big day runs smoothly all adds up. As well as being time-consuming, being a big part of the bride’s experience can be stressful.

With bridesmaids for hire becoming increasingly popular to help bulk up a wedding party and act as a planner for the big day, have you ever wondered how much you could charge to be one?

Based on the average weekly salary of £615 (based on a 40-hour work week this works out at £15.38 per hour), we found that bridesmaids can charge the following base fees. 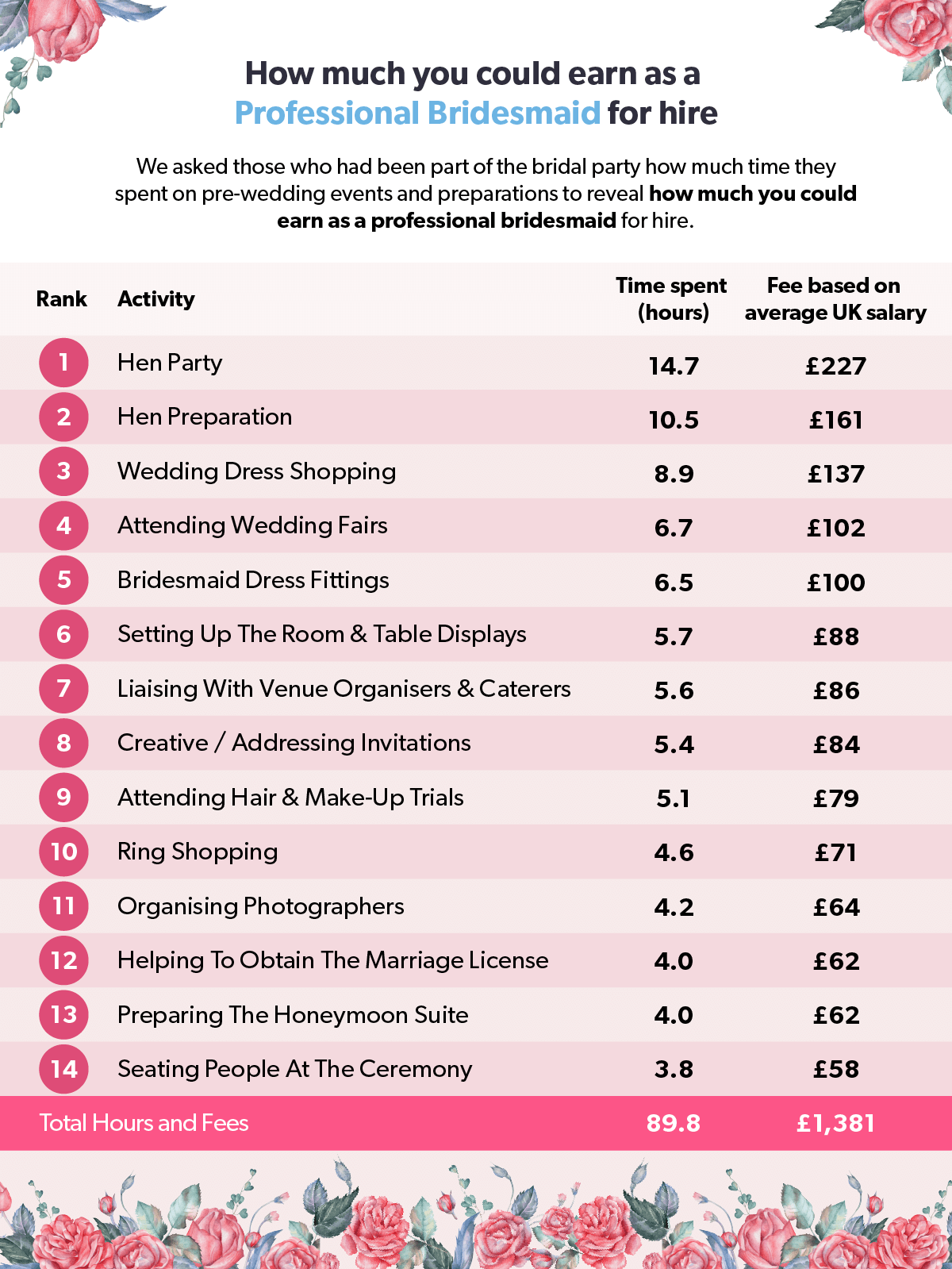 With time spent on everything from dress fittings to party planning totalling 89.8 hours on average, Brits can charge a healthy base fee of £1,381 to be a bridesmaid for hire per wedding. Even if you were hired for six weddings a year, that’s an additional £8,286 which makes for a nice side-hustle.

Attending a wedding is expensive and often needs to be planned in advance. With these findings, Savoo highlights the different costs that need to be taken into account, to enable people to budget according to their means and cut back on any cost if necessary.

All individuals cost have been rounded up to the nearest pound. The final total is an accurate representation of the average amount.