Since 1950, humans have produced more than 8 billion tons of plastic waste. It’s estimated that between 4.8 to 12.7 million tons of plastic enter the ocean every year. Plastic bottles, bags, packaging – the mountain of rubbish with which we poison our landscape and the oceans are constantly growing in the face of increasing prosperity.

Many countries and cities are trying to change course. But which ones are leading the way by reducing their usage of plastic?

We looked into which major cities are leading the zero waste charge by reducing their usage of plastic. We also have taken a look at how much it costs to shop for everyday household items at a plastic-free store compared to a supermarket to see how much more you could be saving or spending.

The top 10 cities leading the way to zero waste

By analysing the number of zero waste stores and flea markets available in a city, as well as their recycling rate, plastic bag regulations and their amount of household and plastic waste, we have determined which locations are most committed to being plastic-free.

These are the top 10 zero waste cities around the world: 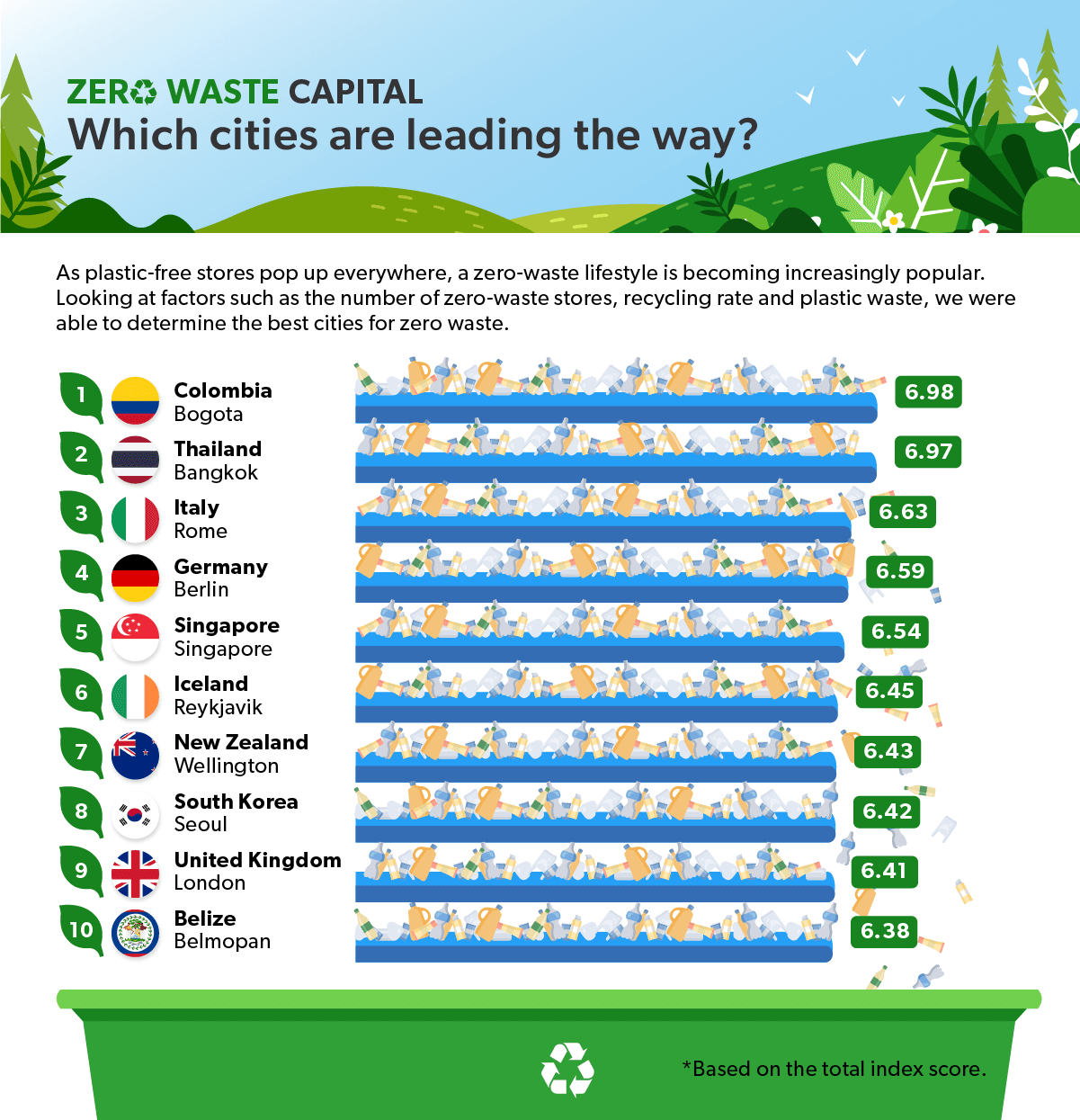 Bogotá takes the crown as the world’s zero waste capital. Located in the centre of the country, Bogotá has a staggering 176 flea markets open in the town, according to Google.

Banning the use of plastic bags since 2017, the Colombian city generates one of the lowest amounts of plastic waste at 2,413,455 tons a year. Producing just 70 kg per capita a year, the nation also boasts a low volume of household food waste.

Shoppers looking to splash a little cash on vintage, unique items should head to Bangkok. Home to 192 flea markets, Bangkok is known to hold some of the world’s best floating markets. Ranking in second place, 19% of municipal waste is recycled in Thailand and the country banned the use of plastic bags last year in 2021.

Rounding off the top three is the Italian city of Rome. Although the city currently has no zero waste store open at the moment (according to Google maps), the town is a clear advocate for the phrase ‘one man’s trash is another man’s treasure’. Home to a large number of flea markets (101), shoppers can get amazing second-hand items from Italian antiques to designer goods.

London places in the eighth position. Consumers hoping to reduce their plastic waste consumption should head to the English capital due to its large quantity of zero waste stores available to the public (25). To help the reduction of plastic waste, the nation currently charges 10p per single-use carrier bag.

Ranking ninth overall, the United Kingdom generates one of the lowest amounts of plastic waste in the world at 4,925,590 tonnes a year, but it’s Funafuti in Tuvalu that produces the smallest amount of plastic waste a year at 554 tons.

Singapore takes the crown as the least wasteful country. The nation currently recycles 61% of its municipal waste.

Skopje ranks as the worst city for zero waste

Analysing the data, Savoo was able to determine which cities rank worst for moving towards zero waste, and it turns out the city of Skopje comes first. Known for its rich architecture, the city has no zero waste store available and just 8 flea markets open. With a recycling rate of less than 1% (0.2%), it’s no surprise that the city made the bottom.

But who else is failing in the race to zero waste?

The graphic below shows the bottom 10 zero waste cities: 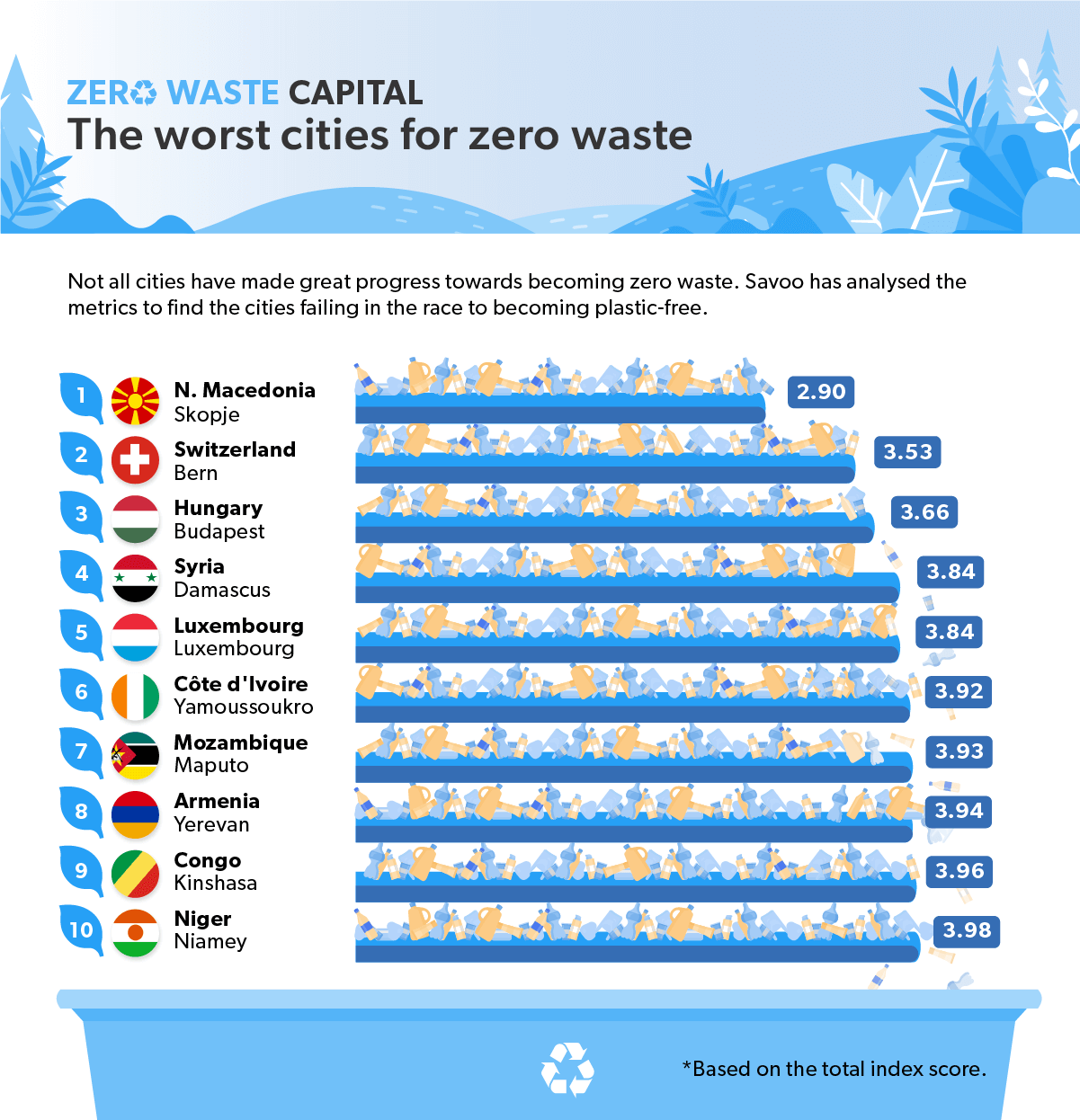 Shockingly, two central European cities have made the bottom 10; Bern in Switzerland and Budapest in Hungary. Both charge their citizens for the use of plastic bags. However, the charge in Bern is completely voluntary.

Both cities have scored poorly, thanks in large part to the low number of zero waste shops available in each place – two in Bern and three in Budapest. Although Bern and Budapest have a high recycling rate (30% and 26% respectively), the high volume of household food waste in each town has lowered its overall score. Findings show that Abuja, Nigeria has the highest proportion of household waste at 189 kg per capita a year, while Moscow, Russia has the lowest at 33k kg per capita a year.

Reducing the amount of rubbish in your household has become a popular commitment consumers have to take in order to become plastic-free and obtain products that don’t harm the environment.

Shoppers have opted out from buying at the supermarket, choosing to support local stores instead, where plastic-free options are more obtainable. But have you ever wondered how much it actually costs to move to a zero waste lifestyle?

Savoo has analysed the average cost of groceries in the supermarket and zero waste stores to find out how much more you are saving or spending by going plastic-free. 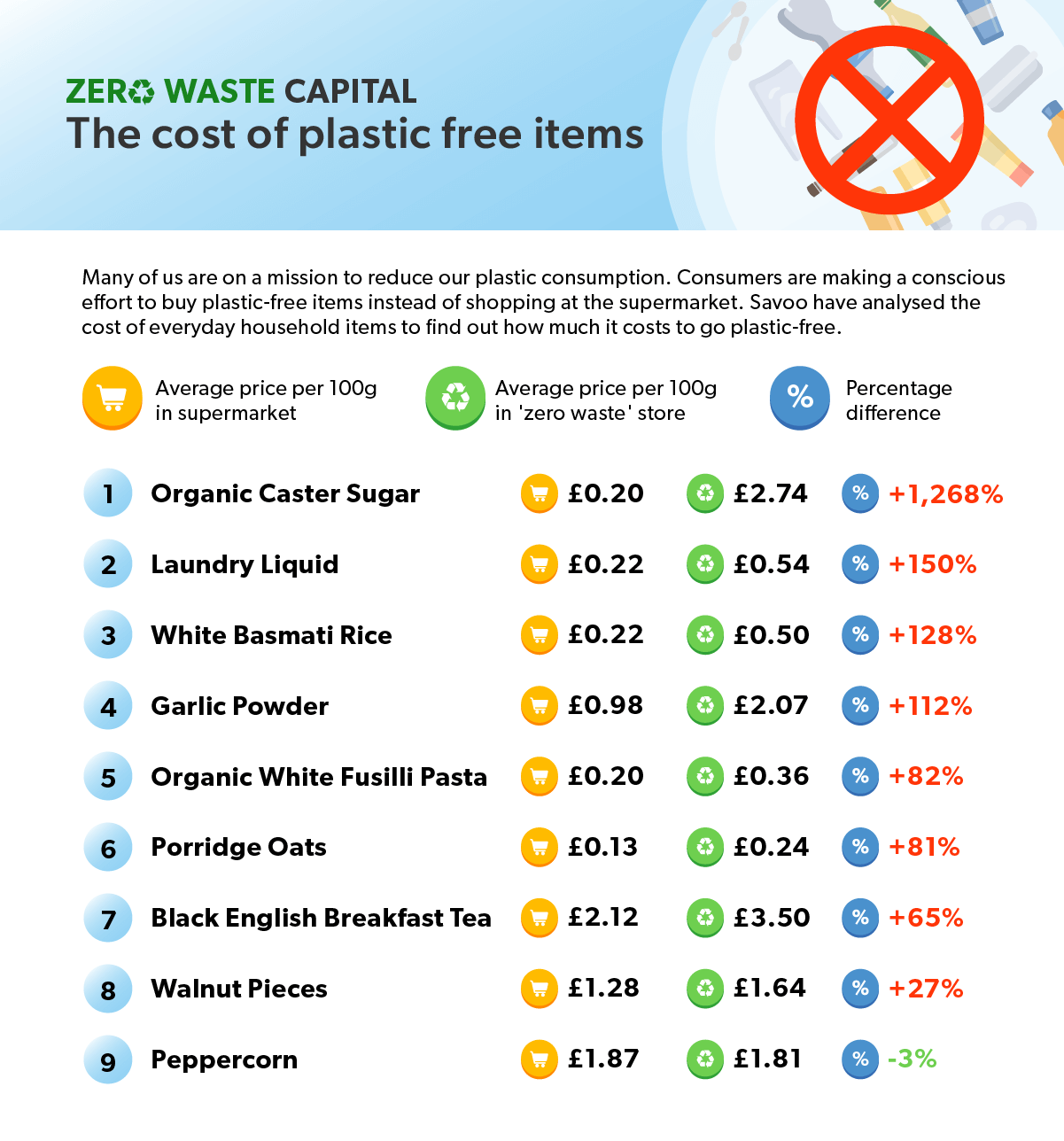 Other items that have a large price increase are garlic powder and white basmati rice (128% and 112% respectively). If you are looking to save some coins while shopping in a zero waste shop, then peppercorn is the way to go. You can expect to save 6p per 100g by shopping plastic-free.

As we continue to move towards a zero waste world, how will each city compare in the future?

While choosing to live a zero waste lifestyle may seem daunting and expensive at times, it doesn’t always have to be. A huge part of zero waste living is changing how you view things. By making more conscious choices when shopping for items, not only do you reduce your own waste, but you can also eventually save more.

With a zero waste lifestyle becoming more and more popular every day, there are a number of resources available that help you create a more sustainable way of living.